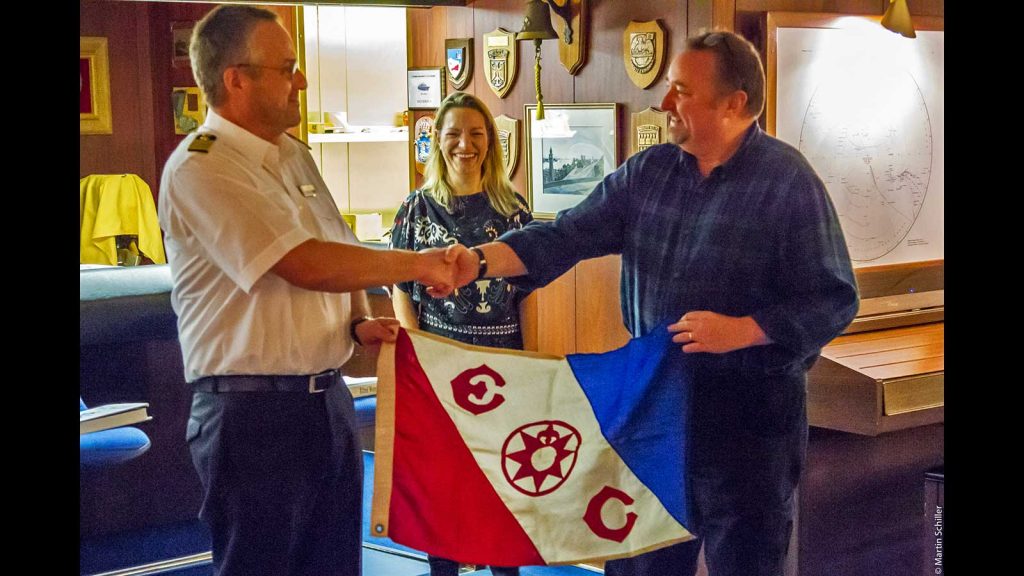 Hands across the sea. Captain Stefan Schwarze, chief scientist Prof. Dr. Antje Boetius, and blog author Chris German celebrating the end of their expedition together with Explorers Club Flag 80. It was not lost on the NUI team that Capt. Schwarze insisted that this should only be “auf wiedersehen,” (literally, “see you again”) not “goodbye.” Should we come back with a deeper-diving NUI and find those vents? (photo by Martin Schiller, AWI)

Friday, October 21 – At the risk of ruining what was already a fine final blog post (if I do say so myself), the further we get from the heat of the action, the more appreciation I have begun to develop for what we DID achieve on this expedition.

Part of my change in perspective came on Wednesday, once we had scrubbed out the NUI hangar and packed our office/laboratory space, when I sat down and put together a five-minute movie that captures some of the highlights from our ROV dive to the seafloor on Dive 16. What it shows really does bring new insights to life up in that remote and (one would have thought) quite hostile place. As soon as we get back to dry land, I’ll look forward to uploading a version of that video to this.

A second change in perspective came as a result of a special “farewell” celebration that Antje organized this morning in the formal Blue Saloon on the same deck as the captain’s and chief scientist’s cabins. It’s a very beautiful space and, as Antje explained it, it’s a place for us to begin to leave behind our rough sailor attributes and prepare to return to polite, civilized society.

After some introductory remarks from our captain that included some remarkable statistics (we travelled more than 4000 kilometers (2,500 miles) on this cruise and our fuel bill alone was more than 600,000 Euros ($650,000)—Antje led a vote of thanks, on behalf of the science party, to the captain and crew. We celebrated with some music we had prepared for the captain and his officers and ended with a very special moment: My cabin-mate, Louis Whitcomb, brought along four copies of a new biography of Alfred Wegener (for whom Antje’s home institution, which is also the home port of the Polarstern, is named), each inscribed by the author, one especially for Captain Schwarze, one for Antje, one for the ship’s library (also housed in the Blue Saloon), and one for the library of the Alfred Wegener Institute, which Antje will deliver once we get home.

And now everything really IS just about done. Final edits to the cruise report are complete—in addition to a chapter about NUI, I am contributing to the Marine Geology and the Hydrothermal Plume sections. My last set of laundry is complete and my boxes of airfreight are sitting in the NUI hangar with paperwork complete (thanks, Mike) ready to be picked up.

Southern Norway and other ships are in sight as we continue south from the Norwegian-Greenland Sea into the North Sea and, eventually, home. We have been blessed with remarkably good weather all the way south, but never a clear sky in time to see the Aurora Borealis so that will have to remain on my “to-do” list. And apparently the North Sea has one last Force 7 storm ready to shake us around all day tomorrow, so I really will sign off now and go and begin my baggage trials.*

*For you land lubbers, that means packing your bags two or three days in advance, before you even have a chance of actually getting to leave ship. On a long transit like this there is always a temptation to get your bags packed as soon as you can, but then there is absolutely NOTHING left to look forward to until port. So it is a fine line to tread: How do I make sure everything will still fit in the bag I brought vs. caving in too early and having to live out of a suitcase for the last few days on board. Ordinarily, I try to wait until 24 hours before port, but a Force 7 storm in the North Sea in October means maybe it’s time to make an exception.