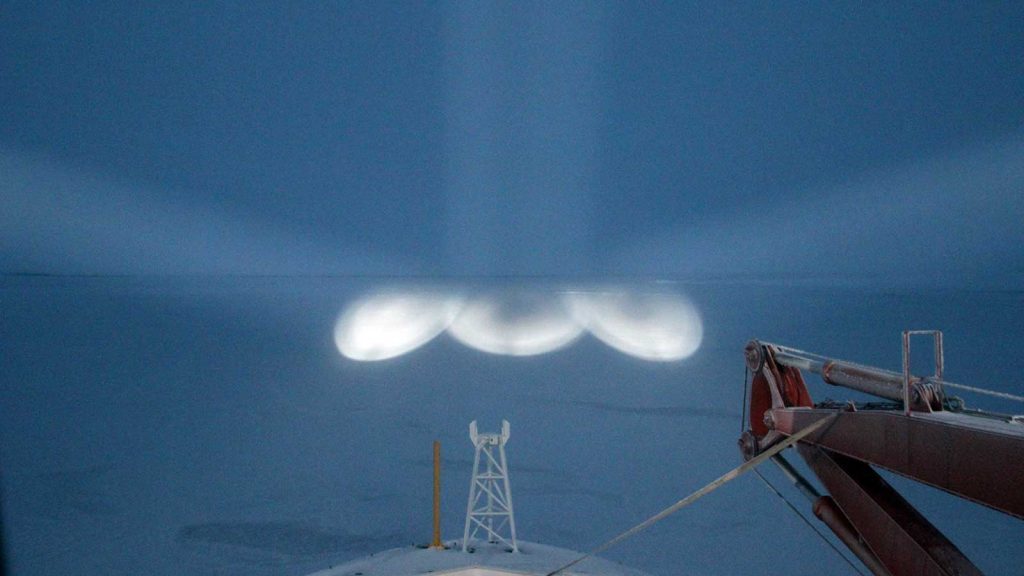 Looks OK to me! This is how dark it was, looking out from the bridge into thick snow at 10:00 a.m. on Friday. The weather is actually supposed to get worse from here. But we’re ready! (Photo by Chris German, Woods Hole Oceanographic Institution)

Friday, October 14 – We are making excellent time through the ice and will be at our final station of the cruise around 4:30 p.m. local time. The ice is thin in the frozen leads of nilas (new ice) that we are able to see using the ice radar and satellite images we receive on the ship. As a consequence, while we are not traveling on a great-circle route (the navigator’s equivalent of a straight line across the surface of a sphere), we are making our maximum in-ice speed of 7 knots as we hasten toward our target. What’s more, the weather this afternoon and evening (but not tomorrow) fall within the boundaries of a NUI operation, so all should be well. Except. . .

When we get to the ice station, our primary goal will be to recover some moored equipment for our ice physics team. We had scheduled to arrive by nightfall tonight and then begin the recovery early tomorrow. That remains the plan, but the captain has informed Antje that he doesn’t want any other work to be done until the prime objective has been achieved. That is his prerogative and we must respect that.

It also means that the ship will be primed and ready to support the ice physics team first thing on Saturday to get their equipment back. In an ideal world, that will be completed early in the day tomorrow, but by then, unless our meteorologist Max is wrong for the first time in the two long cruises I have now spent on the FS Polarstern, the weather window for NUI operations will have closed.

But, like coiled springs, we remain ready to leap into action. One of the systems on NUI we have not yet been able to test is its ability to collect samples from beneath the ice at the ice-water interface. In 2014 we conducted a series of dives in which we observed the interface and collected sensor data up to the underside of the ice (see video here), and even succeeded in “landing” on the underside of the ice. But we did not have a manipulator at the time, as we do now.

In addition, our biologists haven’t been able to get a good sample of under-ice algae using any of the established methods they attempted on the cruise, so, in preparation for this next dive, we have loaded NUI’s new multi-chamber slurp sampler. We also have a new “saber-toothed push-core,” as Casey has named it, that she and Kevin developed in order to break off chunks of ice from the underside that we should also be able to collect with the slurp sampler.

Of course, Kevin already has samples from the ice-water interface at each of the ice stations that he collected from above by drilling down as much as 2 meters (6.6 feet) from the surface to collect detailed samples from top to bottom. This, however, will be a good of NUI’s capabilities for future missions when the vehicle visits places with thicker ice cover, such as an Antarctic ice-shelf or the floating edge of a Greenland glacier.

We would also like to present Antje and her colleagues with a parting gift of green photosynthetic slime to rival the rotting sponge of our last dive. But it seems that the final decision will not be ours to make.