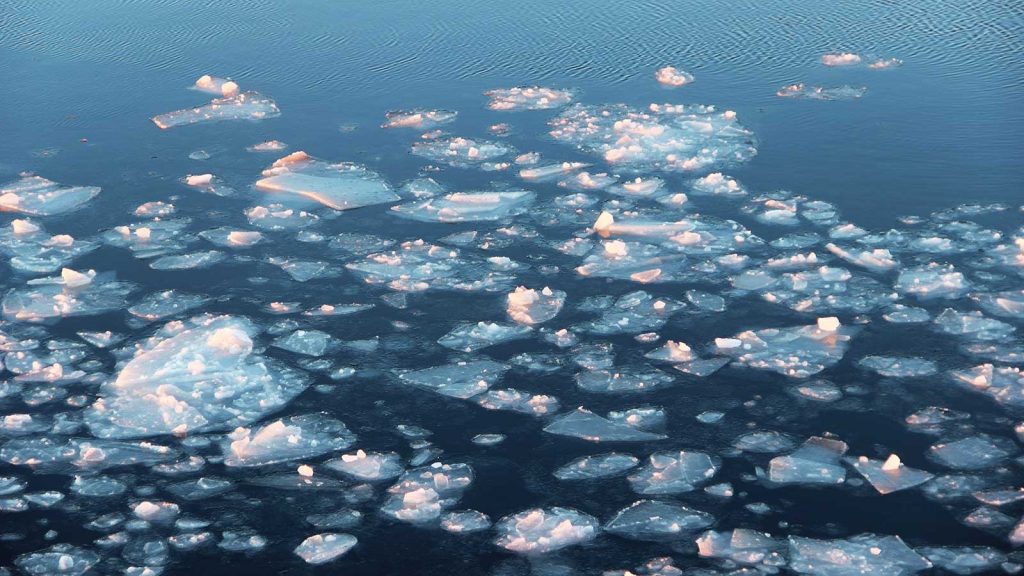 Nympheas, Arctic style. The originals are in Paris at Musée de l’Orangerie—and you don’t need an icebreaker to get there. Recommended. (photo by Chris German, Woods Hole Oceanographic Institution)

Saturday, October 15 – I had been feeling down all day and struggled to work out why. Our ROV dive never happened, but that was expected, so that wasn’t it. Then I looked at the diary on my phone and realized, if I had been on shore today, I would have been in Cambridge, England, paying tribute with many of my longest-standing scientific friends to Prof. Harry Elderfield, who passed away earlier this year. Harry was my Ph.D. advisor and the one scientist, more than any other, who rescued me from wondering what I was going to do with my life and who set me on the road to my career in oceanography. Professionally, I owe him much.

But Harry was also a very cool human being—back in the 1980s he was the only other person I knew in Cambridge who actually enjoyed listening to the music of Talking Heads. That might not have changed, down the years. And while I would like to think that the subsequent 30+ years of my life haven’t really been shaped by 4:23 of art-house music that he and I used to listen to back then, there is (at risk of infringing copyright) a phrase from the song “Once in a Lifetime” that I reproduced at the back of my Ph.D.: “And you may ask yourself: Well, how did I get here?”

The song continues: “Water dissolving, and water removing. There is water, at the bottom of the ocean.” I loved that song from the age of 18, well before I knew there was such a thing as hydrothermal venting. (For those who know the rest of the song, I liked it before I had a beautiful house, and a beautiful wife, as well.)

It was also Harry who first recommended, while we were attending the first Goldschmidt Geochemistry conference in Paris in 1988, that we skip out early one evening and head to the Orangerie Museum where, on a lower level, there are two oval-shaped rooms designed specifically to hold a set of huge artworks by Claude Monet. The best way I can describe it is that entering the room is like walking inside a Faberge egg, and it remains my favorite man-made place on the planet.

Anyway, all this reminiscing has made me realize that, about four weeks ago I was out on deck under a full moon and saw the broken ice lit up in gorgeous pink and purple hues against the deep blue-black of the ocean, which led me—pretentious as ever—to name my photographs “Nympheas,” after the title of those Monet paintings back in Paris.

So that explains my choice for today’s status photo. If it looks underwhelming in black-and-white, at least it won’t be long now until we can post the full color originals.

And thanks, Harry—but not just for the science.