Where Dragons May Dwell 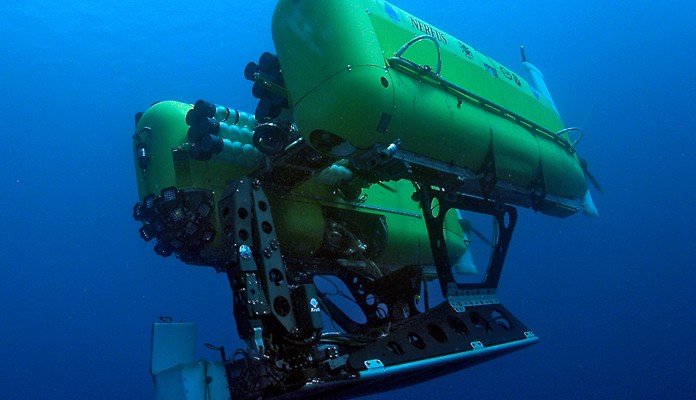 Researchers will use the hybrid remotely operated vehicle (HROV) Nereus to make observations and collect samples along the axis and flank of the Kermadec Trench. (Photo by Advanced Imaging and Visualization Laboratory, Woods Hole Oceanographic Institution)

It’s difficult to believe that terra incognita exists anywhere on Earth today—the modern-day equivalent of the margins on ancient maps that were populated by dragons. But there is and it is surprisingly large. Nearly everything 6,000 meters beneath the ocean surface—an area about the size of Australia—is almost entirely unexplored. This is the hadal zone, which we will investigate over the next six weeks.

From the time they were discovered in the 1800s up until a few decades ago, ocean trenches, which make up the bulk of the hadal zone, were believed to be devoid of life because of their extreme depths. It wasn’t until the 1950s when two expeditions, aboard the Danish Galthea and the Soviet Vitjaz, collected samples in trenches and discovered surprisingly large and complex organisms. They were living far deeper than anyone thought it would be possible to find enough food to sustain life.

These trips, and a few more opportunistic observations since then, have produced an initial catalog of hadal species. But there is no way to use this spotty data to draw conclusions about how individual species, communities, or ecosystems vary with depth or differ from one part of the ocean to another.

That is no reflection on the abilities of those who went before us. The extreme conditions that scientists thought would prohibit life in the deep ocean—particularly extreme pressure and distance from the surface—make exploration there a technological challenge unlike almost any other. More than a dozen men have stood on the surface of the moon, but only three have been to Challenger Deep in the Marianas Trench, the deepest known spot in the ocean. No one has ventured to any of the other hadal zone ocean trenches. Until recently, no underwater vehicles or instruments could support a sustained scientific study of the deep ocean and seafloor.

That is where we come in. The HADES (HADal Ecosystem Studies) project is funded by the National Science Foundation to make a systematic study of the organisms and conditions that define this unique part of our planet. This first HADES expedition will focus on a segment of the Kermadec Trench beginning 150 miles northwest of New Zealand. Over 40 days, a team of scientists and engineers from seven different research institutions are scheduled to conduct a series of 14 dives. They will use the hybrid remotely operated vehicle (HROV) Nereus to make observations and collect samples along the axis and flank of the trench.

Recent technological advances produced our underwater workhorse and make it possible to gather the kinds of data, imagery, and samples for scientific study and analysis. You’ll be learning more about Nereus and what it can do, but suffice to say, it is an extremely complex machine and one of only two underwater vehicles capable of reaching the deepest ocean depths.

Images and samples brought to the surface will help scientists on board and around the world begin to achieve some ambitious goals:

This ambitious effort is made even more complicated by the vagaries of weather, engineering, and time. On this blog, we will attempt to bring you as much of the cruise as possible and as immediately as possible. Over the next six weeks, you will be able to read about our explorations and adventures, see photos and videos of cruise highlights, and even tune into an occasional live broadcast from Nereus and our research vessel, R/V Thomas G. Thompson.

If we do find some of those dragons that once lurked on the edges of old maps, you’ll be among the first to find out.

Chief Scientist Tim Shank answers questions about trenches: how they are formed, what lives there, why we should understand them in greater detail. (Woods Hole Oceanographic Institution)