Gifts from the Deep 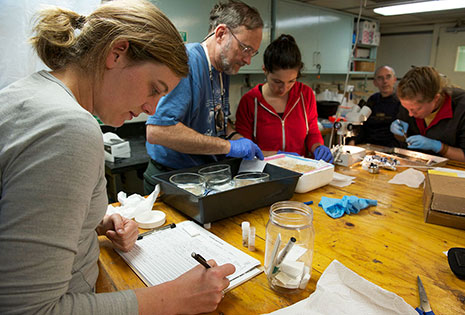 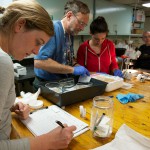 Sadie Mills from the National Institute of Water and Atmospheric Research (NIWA) in New Zealand keeps track of specimens and samples in the bio lab after recovery of the fish trap. (Photo by Ken Kostel, Woods Hole Oceanographic Institution) 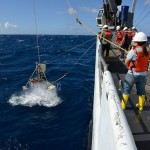 The hadal lander is recovered to the deck of the ship with three amphipod traps (white cylinders) strapped to one leg. (Photo by Ken Kostel, Woods Hole Oceanographic Institution) 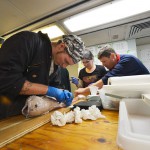 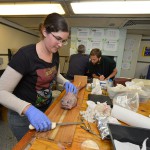 Mackenzie Gerringer from the University of Hawaii prepares to remove the otoliths (ear bones) from a large rattail in the ship’s biology lab. (Photo by Ken Kostel, Woods Hole Oceanographic Institution) 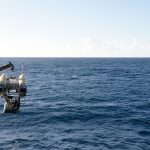 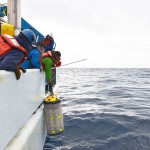 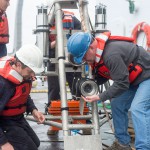 We’ve had two days of surprises, both of them fish-related. Yesterday, Alan Jamieson brought back video from his hadal lander and was bemoaning the fact that he would have to look at another dozen or so hours of cusk eels not doing much. They tend to hover just out of reach of the bait or drift slowly past the camera lens. “They really aren’t that bright,” he’s been fond of saying.

Then he took a closer look at the footage and found something astonishing even to someone who has spent days watching cusk eels. In one segment, an amphipod swims past an eel’s head and bumps into the bait on the lander, and the cusk eel turns surprisingly fast, opens its mouth surprisingly wide, and slurps up the amphipod (and quite a bit of sediment at the same time).

But it doesn’t just happen once. In one deployment, Alan’s lander captured cusk eels turning to chase amphipods four times. This tells us something very fundamental about the hadal ecosystem: how many levels in the food chain there might be down there. That is an example of the level of information that is lacking about the deep ocean—who is eating whom? It turns out that perhaps the eels know that amphipods will be attracted to the bait and are simply waiting for an easy meal to swim past. Jamieson’s opinion about their intelligence may be changing, which is no small feat because he has probably seen more examples of cusk eel behavior than anyone else on Earth.

Our second surprise occurred today, when the team led by Jeff Drazen decided they’d had enough of pulling up the fish trap with only one or two specimens. So they put baited hooks inside and out to see if fish might be finding their way into the trap, but somehow escaping.

This afternoon, when the trap came up, sure enough, there were a large cusk eel and a rattail dangling from two of the hooks. In addition, the bait on the external hooks was almost entirely missing, while the bait inside was largely untouched, confirming that most of the action was taking place outside the trap.

In the bio lab, both were measured, dissected, and sampled and found to be among the largest of each species ever captured. Certainly not the largest, but important specimens, nonetheless, as there are very few examples of these fish in this stage of life.

We don’t know exactly how old they are because there are no good age-growth models for these species, but University of Hawaii grad student Mackenzie Gerringer is trying to fill in that blank. In addition to the tissue, organ, and fluid samples she is taking from each fish for other members of the cruise (and other labs on shore), she is also removing the otoliths—ear bones—from each one we catch.

Like human ear bones, fish otoliths help the animals sense and interact with their environment. These tiny, pebble-like bundles of calcium carbonate contain light and dark bands that, like tree rings, record the growth of the individual they come from. Unlike trees, however, fish don’t always lay down annual rings and each species is different, so deciphering the story of an otolith is a tricky task.

Scientists can, if they know how the rings correlate to age, simply cut the otolith and count them. If not, they can take small samples from each ring and look for a spike in radioactive carbon-14 released into the ocean during nuclear weapons testing between the 1950s and 1970s. Animals take up this material, which, because carbon in the otolith is not replaced over time, will become a permanent marker of a specific period in time.

Other researchers are looking at factors that describe feeding activity and metabolic energy level. All of these are basic biological parameters that are poorly understood or entirely unknown for almost all hadal animals, but are especially important in understanding the physiology and behavior of a critical member of the deep-ocean ecosystem—its top predator, which is what scavenging rattails are. “This is it,” said Drazen. “These are the biggest, baddest guys in town.”

Filling in these blanks will do more than just describe a species better. It wil help us understand the hadal community and environment better. It will also give us a better idea of how human activity might impact even the deep ocean.

Because rattails and many other hadal species are scavengers, they rely on dead animals floating down from above for a steady supply of food. There is already evidence linking changes in populations of surface fish to communities of animals in the deep. Changes like this can occur naturally, as a result of migration, but over-fishing could also reach down well below the level of nets and lines to impact entire ecosystems thousands of meters below. “It’s not out-of-sight, out-of-mind,” said Jamieson. “It’s all one big body of water.”