All the Fish in the (Deep) Sea 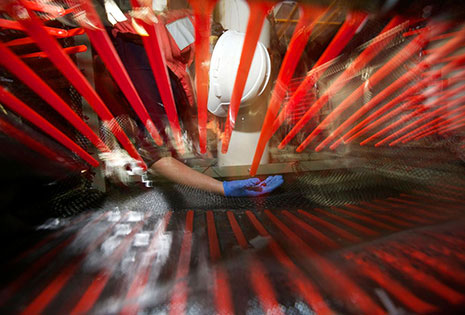 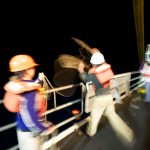 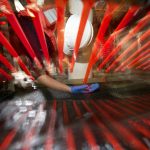 Members of the HADES science team scour the inside of the fish trap for every last organism brought to the surface. (Photo by Ken Kostel, Woods Hole Oceanographic Institution) 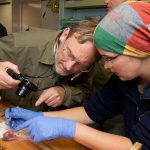 Paul Yancey from Whitman College photographs a snailfish that he will eventually test for the type and concentration of osmolytes in its cells. (Photo by Ken Kostel, Woods Hole Oceanographic Institution) 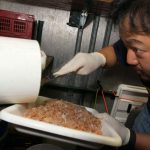 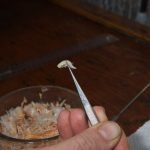 Amphipods feed voraciously on the bait in traps and will also turn on each other, cannibalizing other amphipods caught in the trap. (Photo by Ken Kostel, Woods Hole Oceanographic Institution) 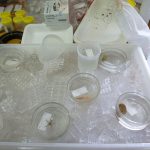 Organisms brought back to the surface by Nereus in the slurp chamber. (Photo by Ken Kostel, Woods Hole Oceanographic Institution) 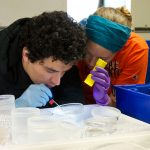 Santiago Herrera, a postdoc from WHOI, and Kirstin Meyer, a graduate student from the University of Oregon, examine one of the organisms brought up by Nereus from 8,000 meters. (Photo by Ken Kostel, Woods Hole Oceanographic Institution) 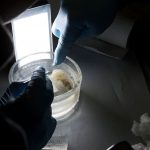 Members of the HADES team examine an anemone-like organism from 8,000 meters in the Kermadec Trench. (Photo by Ken Kostel, Woods Hole Oceanographic Institution) 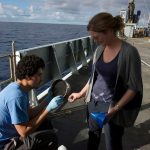 Sadie Mills (right) from the National Institute for Water and Atmospheric Research in New Zealand and WHOI’s Santiago Herrera sieve a sediment sample for organisms that live beneath the seafloor. (Photo by Ken Kostel, Woods Hole Oceanographic Institution) 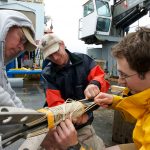 (Left to right) Marshall Swartz from WHOI and Thomas G. Thompson crewmembers Brian Clampitt and Paul Benecki use a bit of old-fashioned seamanship to reinforce the strain relief on the tether connecting the depressor to the ship. (Photo by Ken Kostel, Woods Hole Oceanographic Institution)

There are many questions about life in the trenches, but one of the most curious is why fish are not found all the way to the very bottom of the deepest places in the ocean.

There is more than 3,000 meters separating the deepest known fish from the deepest point, so there’s plenty of habitat, and other animals, such as amphipods, have adapted and are abundant, so there’s food to be had deeper. A very few fish species, like snailfish, have adapted to the challenges presented by complete darkness, frigid temperatures, and variable food supply of the hadal ocean, and in relative terms the additional depth does not amount to a very great increase in pressure. And yet, like clockwork, snailfish make their final appearance at around 8,000 meters and then are seen no more.

We have pulled up 11 snailfish so far on this trip, making 13 total ever returned alive from the trenches. The hadal lander also videoed snailfish at 7,669 meters, just 34 meters shy of the deepest ever recorded, but at 8,000 meters there was nothing on video but a cloud of amphipods—the preferred food of snailfish—picking the bait clean.

It could be that we are simply witnessing the maximum evolutionary spread of fish into the deep ocean since the major marine extinction event that occurred during the Cretaceous about 94 million years ago. There could also be something about that depth that presents a hard-and-fast physiological barrier that fish evolution has not yet been able to surmount.

In addition to water pressure, animals that live in the ocean have to fight a constant battle against osmotic pressure, the force that attempts to restore the balance of water and salts across a barrier like a cell membrane. There are three options that evolution has provided to cope with a difference in osmotic pressure between a cell and seawater. The first is to simply dehydrate under the influx of salt and the loss of fresh water. In most cases this is not an option, but some cells and organisms can tolerate long periods of dehydration. The second is to prevent water loss (and the uptake of salt) through the presence of molecules inside a cell that equalize the osmotic pressure inside and out, a process called “osmoconforming.” Finally, the individual cells of a multicellular organism can leave the regulation of the environment inside the organism to a specialized organ, such as a kidney, something known as “osmoregulation.”

Freshwater fish have kidneys to get rid of the excess water that tries to force its way into cells because the osmotic pressure of a lake or stream is greater than that of their cells. Marine fish, however, have to get rid of the excess salt they would be left with as water tries to leave their cells; they do this through their gills. A saltwater fish put in freshwater will bloat up, as they have no natural mechanisms for removing excess water, while a freshwater fish dropped into saltwater will simply pickle.

Biologists have long known that many marine fish have the osmolyte trimethylamine N-oxide (TMAO) in their cells even though they also have osmoregulating organs. It wasn’t until 1999 that Paul Yancey, who is a part of this cruise, discovered that the amount of TMAO in fish cells increases with depth. This occurs despite the fact that the chemistry of seawater does not change appreciably in the deep ocean, so there is little reason for the change, and no other environmental condition except pressure changes in the same linear fashion.

One of the critical actions that occurs within a cell is the folding of proteins into forms that are able to carry out specific functions like transport oxygen and antibodies or flex muscle. This folding can be disrupted by pressure, however, whenever the folds require a protein to increase in volume. Some proteins have evolved structures that are specifically adapted to pressure, but those do not seem to be sufficient to account for all of the pressure resistance required for a fish to survive deep in the hadal zone.

It is now understood that TMAO, which is responsible for the fishy odor of marine fish, also helps keep water molecules under pressure from interfering with protein folding. Too much of the osmolyte can also interfere, however. In addition, more TMAO is needed the deeper a fish goes, but when Yancey extended the line relating pressure to TMAO concentration, he found that at about 8,500 meters there would be so much of it in a cell that the osmotic pressure would reverse and water would be drawn in, much like it would in a freshwater fish. To deal with that, the marine fish found in the deepest trenches would have to behave physiologically like their freshwater cousins—or like salmon and other fish that are able to reactivate their kidneys and cross from saltwater to fresh.

Part of the reason Yancey and one of his students Gemma Wallace are on this cruise is to see whether samples of fish muscle do, indeed, fall along the line that correlates pressure to TMAO content and to test fish from depths not yet sampled, as well as new species. They are also interested in examining the osmolytes in amphipods, one of the model organisms that helps biologists study adaptations that organisms have made throughout the ocean. Amphipods are found from beaches to the bottom of the deepest trench, so understanding their ability to survive will be key to learning how life has come to occupy every corner of the world’s single largest habitat and to surmount the challenges that the deep ocean presents.