About the Iceland Greenland Seas Project

The Iceland Greenland Seas Project (IGP) is a coordinated atmosphere-ocean research program investigating climate processes in the source region of the densest waters of the Atlantic Meridional Overturning Circulation. During February and March 2018, a field campaign was executed over the Iceland and southern Greenland Seas that utilized a range of observing platforms to investigate critical processes in the region – including a research vessel, a research aircraft, moorings, sea gliders, floats and a meteorological buoy. A remarkable feature of the field campaign was the highly-coordinated deployment of the observing platforms, whereby the research vessel and aircraft tracks were planned in concert to allow simultaneous sampling of the atmosphere, the ocean and their interactions. This joint planning was supported by tailor-made convection-permitting weather forecasts and novel diagnostics from an ensemble prediction system. The scientific aims of the IGP are to characterize the atmospheric forcing and the ocean response of coupled processes; in particular, cold-air outbreaks in the vicinity of the marginal-ice zone and their triggering of oceanic heat loss, and the role of freshwater in the generation of dense water masses. The campaign observed the lifecycle of a long-lasting cold-air outbreak over the Iceland Sea and the development of a cold-air outbreak over the Greenland Sea. Repeated profiling revealed the immediate impact on the ocean, while a comprehensive hydrographic survey provided a rare picture of these subpolar seas in winter. A joint atmosphere-ocean approach is also being used in the analysis phase, with coupled observational analysis and coordinated numerical modelling activities underway. 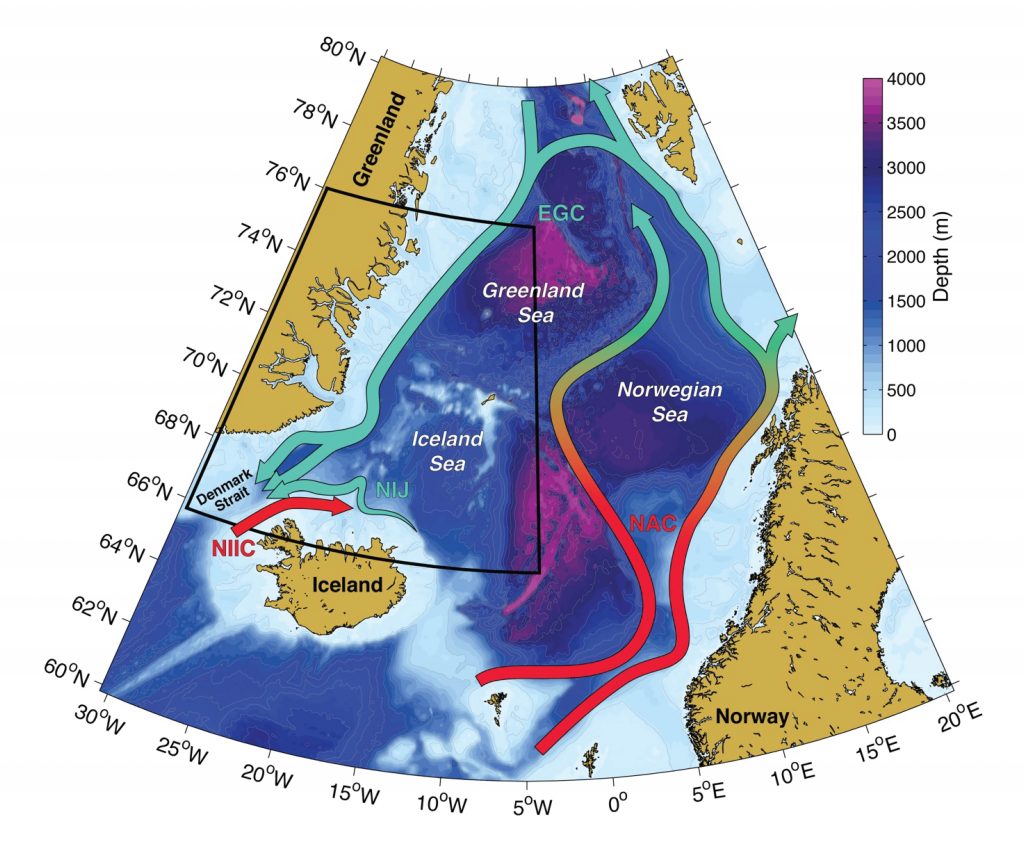 Schematic of the major boundary currents of the Nordic Seas, overlaid on a map of bathymetry (shading). The sub-tropical origin water entering the Norwegian Sea gradually cools and becomes denser as it circulates around the perimeter of the basins, exiting as overflow water through the west side of Denmark Strait. The warm water entering Denmark Strait is believed to be converted into the overflow water flowing southward through the east side of the strait. The IGP study area is delimited by the black lines.

Locations of the oceanographic observations from the winter 2018 cruise and the mooring deployments. The left panel shows the hydrographic sections occupied in the Iceland and Greenland Seas. The right panel focuses on the northwest Iceland Sea and shows the location of intensive surveys where triangular patterns or lines were repeated several times in coordination with the research aircraft. The southern triangle was sampled three times using a combination of CTDs and XCTDs, while the northern triangle was sampled once. 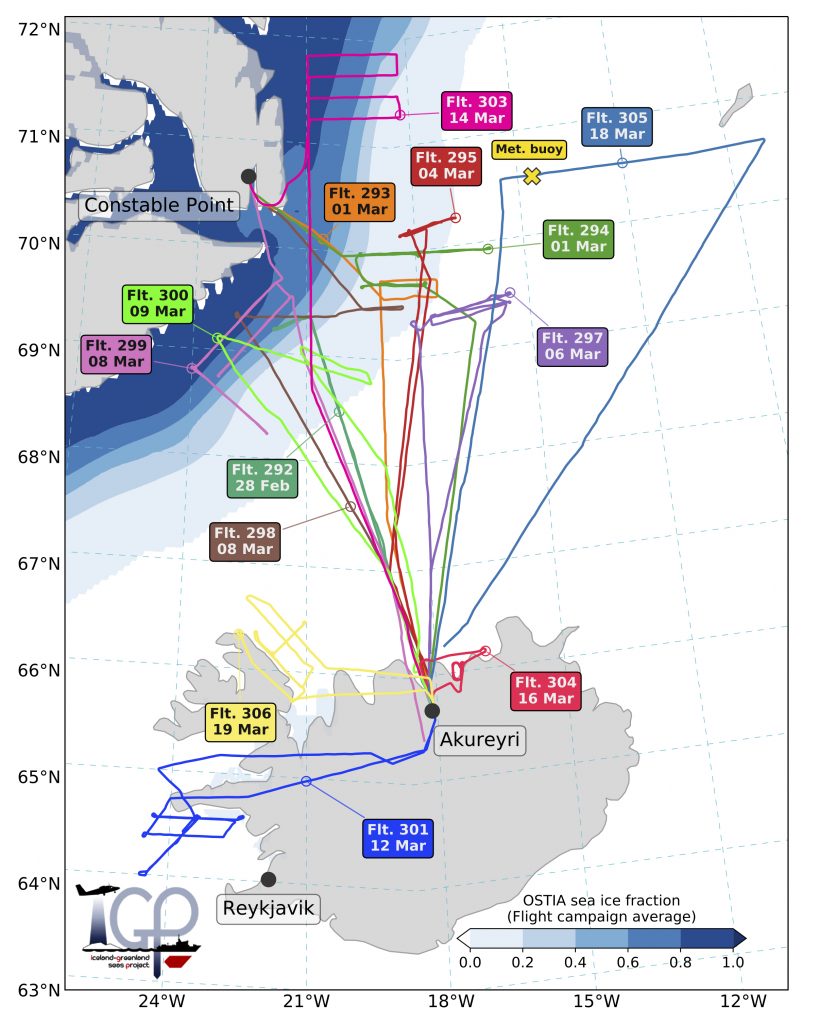 Location of all science flights from the aircraft campaign. The average sea-ice fraction from the period is contoured (based on OSTIA data). Note flights 293, 294, 295 and 297 were in the vicinity of the NRV Alliance, while flight 305 passed the meteorological buoy.