Transform faults and chemical differences between vent sites,
each separated by 100s of kilometers, have the potential to genetically
structure populations. The study sites included pairs of sites that were
separated by major transform faults (e.g. Rainbow and Broken Spur) and
sites that were within the same first order segment (e.g. Broken Spur
and TAG). Additionally, the vent sites differed in chemical composition,
especially in metal enrichment. These site characteristics and
relationships allow us to test the effects of faults and metals on
genetic structure and diversity.

Genetic analyses suggest that there is little to no genetic
structure within this geographic region. Most of the pairwise
comparisons have a very large number of migrants per generation
exchanged and all are well above Nm=1 (the level suggested to counter
act genetic drift). However, some comparisons with Rainbow vent had
significant Fst values. Rainbow also lacked a large number of vent
specific rare alleles. This may be indicative of selection due to the
ultramafic host rock or the beginning of a cline to the north. Further
study at other ultramafic host rock vents and at other vent sites
further north and shallower may reveal genetic structure.

R. exoculata are believed to feed in the upper water
column during larval dispersal, allowing shrimp to disperse to vents
despite large physical barriers on the seafloor. The present study does
not support the hypothesis that physical structures act as barriers to
dispersal and gene flow for R. exoculata. The duration and behavior of the larval planktonic life ofRimicaris
remains uncharacterized, but has the potential to control the community
structure and genetic structure on the Mid-Atlantic Ridge. Time-series
studies of genetic structure are needed to understand the processes that
maintain populations at MAR vent sites.

Genetic communication between disjunct communities of hydrothermal vent shrimp, Rimicaris exoculata, on the Mid-Atlantic Ridge (MAR) was investigated using sequence data from the mitochondrial cytochrome b (cyt b).

Adults and juvenile Rimicaris exoculata were collected from four deep MAR vent fields, Rainbow, Broken Spur, TAG and Snake Pit in 2002 and from TAG in 2003 to include a study of temporal genetic variation. Previous allozyme studies suggest genetic homogeneity among TAG, Snake Pit, and Broken Spur; however, prior results have demonstrated that allozymes may not recover existing genetic subdivision. High-relief transform faults, dynamic latitudinal ocean circulation patterns (perhaps associated with transform faults or fracture zones), and/or the relative stability of venting activity along the slow-spreading Mid-Atlantic Ridge present potential mechanisms for genetic isolation between vent fields hundreds of kilometers apart.

Complete panmixia was not observed given haplotype differences between Rainbow and TAG, Broken Spur and Snake Pit, nor between adults and juveniles. However, phylogeographic, coalesence, and AMOVA analysis of the cyt b gene at these four vent fields along the MAR are consistent with allozyme data, suggesting that high levels of gene flow do occur within R. exoculata. Larvae likely overcome the barriers to dispersal by transport in upper ocean currents beyond the direct influence of the ridge topography.

Despite observed geographic homogeneity, temporal variation between years and between adults and juveniles may offer insight into dispersal patterns on an ecological scale. Barriers to dispersal may still exist, driven instead by upper ocean current regimes such as the separation between the North Atlantic Central Gyre and its southern counterpart. In order to accurately address the connectivity within R. exoculata, other ocean basins must be examined.

Hypothesis that we are examning are: transform faults act as barriers to gene flow, metal concentrations can impose selection, and genetic structure and diversity change over time. 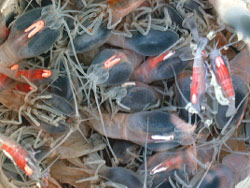 We thank the pilots and crew of the R/V Atlantis and the DSV ALVIN, and the R/V Akademik Keldysh, and Mir 1 & 2 for their invaluable assistance. We especiallly thank R. Reves-Sohn, S. Humphris, J.P. Canales, W. Lange, and A. Sagalevitch for the opportunity to participate on cruises. This work is supported by the Ocean Life Institute and the Deep Ocean Exploration Institute of the WHOI.