In some ways, today is the real first day of the upcoming oceanographic research cruise on the R/V Armstrong.  This is the day that all the equipment for the cruise is being loaded into a shipping container that will be trucked to Portland, Maine and loaded onto a container vessel headed for Iceland. The Armstrong itself set off for Iceland last week, with a different group of scientists on board. The ship was filled with their equipment, so there was no room for ours. This means we have to send all our stuff separately, and load it onto Armstrong in the few days just before our cruise starts on June 5.  It will take about a week for the container vessel to reach Iceland. Then our ship's agent, someone we pay to look after our equipment when it arrives in Iceland, will help move it all through customs and eventually to the dock where Armstrong will be tied up. If all goes according to plan, our equipment should be sitting on the dock ready to load when we arrive to join the cruise on June 2.

So what do we need for this cruise? Every oceanographic research cruise has a slightly different, or in some cases, very different goal, and the equipment we need depends on what we want to accomplish. In our case, we want to set up four deep-sea moorings with sensors attached that will measure water temperature, salinity and the strength and direction of the currents.  This requires a lot of heavy equipment--I like to call this "industrial oceanography" because the handling of the equipment and its deployment over the side of the ship require the scientists and technicians to wear hard hats and steel-toed boots! The stuff is heavy, we need cranes to move it around, and if anything fell, someone could get badly injured unless they are wearing protective gear.

A mooring is analogous   to a boat mooring in a harbor:  there is a heavy anchor, some rope or wire coming up from the anchor, and some buoyant balls or one ball that keep the wire upright. The boat is usually attached to the floating ball.

In our case, the anchor weighs thousands of pounds, the wire can be a mile long, and lots of floating balls are needed to keep the wire upright. Those floating balls are really glass spheres with yellow plastic coverings (we call them "hard hats"; Figure 1), and we need to ship lots of them for our four moorings. Unlike a boat mooring, the floating balls don't actually float at the ocean surface. This is because the part of the ocean we are most interested in lies way below the surface. Our mooring anchors are sometimes made of old railroad car wheels, with several welded together to make the anchor heavy enough so that the mooring is not swept away by the ocean currents. We send the wire all wrapped up on wooden spools (Figure 2), ready to be unwound during the mooring deployment. Finally, we also have to send all the sensors that will be clamped to the wire to measure the currents. These are sent in separate boxes so they are well-protected during shipment (Figure 3).  Once we load the gear into shipping containers, trucks come and bring the containers to a ship that will take them to Iceland (Figures 4a,b,c).

So even though the cruise doesn't officially begin for another month, engineers and technicians have been very busy preparing all this gear for shipment to Iceland. Once the equipment is on its way, there is a brief lull in activity, until we get ready to travel to Iceland ourselves and load the Armstrong for our cruise. Next time, I'll talk about an indoor navigation system that I'm going to experiment with to help me find my way around the Armstrong. 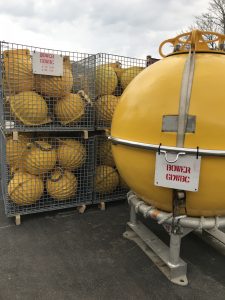 Figure 1: Glass flotation in yellow hard hats, 12 balls per wire cage. Also show is large flotation sphere that will go on the top of one mooring. All gear is carefully labeled; there are painted plywood signs on each piece with the words “BOWER GDWBC” which will identify all our gear. The acronym GDWBC stands for Greenland Deep Western Boundary Current, which is the name of the main current we are going to study and measure with these instruments. 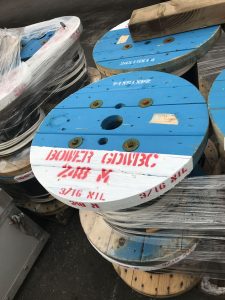 Figure 2: Spools with wire. Each mooring is made up of wire with instruments, flotation, and an anchor. This picture shows a couple of spools ready to be shipped to Iceland and loaded on the ship. Here, too, each spool is labeled with ‘BOWER GDWBC’, and the length and type of wire is noted, in this case ‘248 M 3/16 NIL’ stands for 248 meters length of 3/16 inches diameter JacNil wirerope, a type of wire that is good to use at sea for this type of work. Many spools of wire will be used to make up a single mooring, each of which is a couple thousands of meters tall. 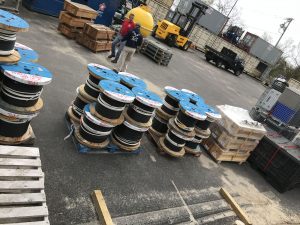 Figure 3: Wooden pallets loaded with gear to be used to assemble the moorings. All equipment needs to be either loaded onto wooden pallets, or put in wire cages, to be efficiently lifted with forklifts and loaded into shipping containers (large metal gray and tan containers in background). Wooden boxes on pallets house instruments that will be secured to the moorings and measure ocean properties such as temperature and salinity. 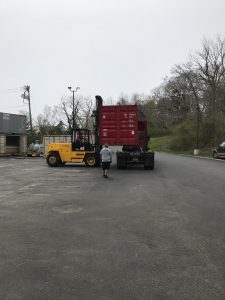 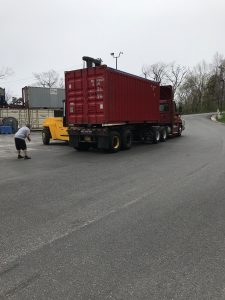 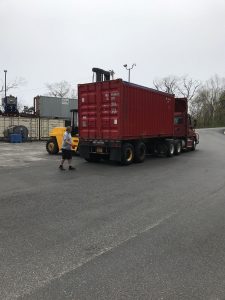