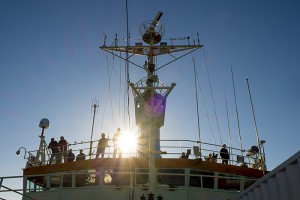 Scientists and crew gather on the bridge of the R/V Knorr as the ship passes through Prince Christian Sound, a channel through southern Greenland that connects the Labrador Sea with the Irminger Sea. The stunningly close views of mountains and icebergs were a rare treat for those taking part in the Overturning in the Sub-polar North Atlantic Program (O-SNAP) research cruise this summer. It was also one of the Knorr's last research cruises to the region. After 44 years in service to science, the ship will be de-commissioned next year and replaced by the R/V Neil Armstrong. (Photo by Carolina Nobre, Woods Hole Oceanographic Institution)

Summer 2014 marked the beginning of an exciting new program to better understand the Great Ocean Conveyor. This refers to a multitude of connected currents that extend around the globe, slowly but relentlessly redistributing heat and fresh water. Because of its spherical shape, the Earth is not heated evenly by the sun, and without oceanic and atmospheric currents, the equator would become an inferno and the poles would be in the deep freeze. The Great Ocean Conveyor is therefore an important part of Earth's climate system.

There are many unanswered questions about this complex set of ocean currents--how do they change over seasons, years, decades or millennia? What causes those changes? How will those changes impact life on Earth? Are these currents changing already in response to increased greenhouse gases and global warming?

Amy and colleagues from the U.S. and a half dozen other nations have installed an ocean observing system between Labrador in Canada and Scotland in the U.K.. This effort is called the Overturning in the Subpolar North Atlantic Program, or OSNAP for short. Amy's contribution to this international project is to map the deep currents in the Ocean Conveyor. Over the next three years, she and her colleagues will release 120 floats that will sink to near the sea floor and drift with the currents there for several years. Along their journey, the floats will record the times that sound signals from moored beacons are heard. At the end of the mission, each float will return to the sea surface and transmit this stored information, which Amy will then use to reconstruct the float's circuitous path.

Amy returned to the North Atlantic aboard the R/V Neil Armstrong in June of 2018 to check her moorings and collect data to further her research.  Amy's blog, "Musings of a Blind Oceanographer" recounts this oceanographic expedition.

WHOI is the world's leading non-profit oceanographic research organization. Our mission is to explore and understand the ocean and to educate scientists, students, decision-makers, and the public.
OceanInsight
Copyright © 2020 All Rights Reserved
Privacy Policy.
Problems or questions about the site, please contact webapp-support@whoi.edu