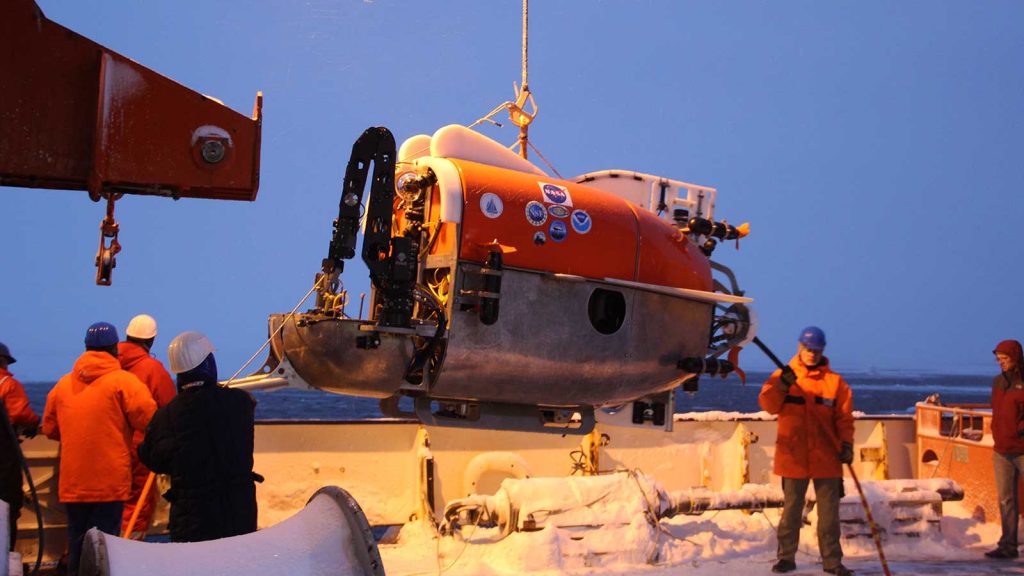 NUI managed its first ROV dive to the bottom a completely ice-covered ocean today (Saturday), only its sixteenth dive ever. Half of them have been on cruises that I have participated in aboard the Polarstern, but this was the only one in which we launched into the eye of a Force 9 storm and then recovered before the weather worsened.

END_OF_DOCUMENT_TOKEN_TO_BE_REPLACED While Hurricane Matthew spins along the east coast of Florida, the scientists, engineers, and crew of Polarstern (red X) wait out their own storm in the Arctic.

Good grief, has it really been 4 weeks already since we left port? The last week, in particular, seems to have gone by in a blur. Or a daze. It is increasingly difficult to keep a grip on what day of the week it is when every day follows the same routine. Except that if tomorrow is Saturday there will be a hearty soup for lunch and, for the non-vegetarians, a large sausage.

END_OF_DOCUMENT_TOKEN_TO_BE_REPLACED 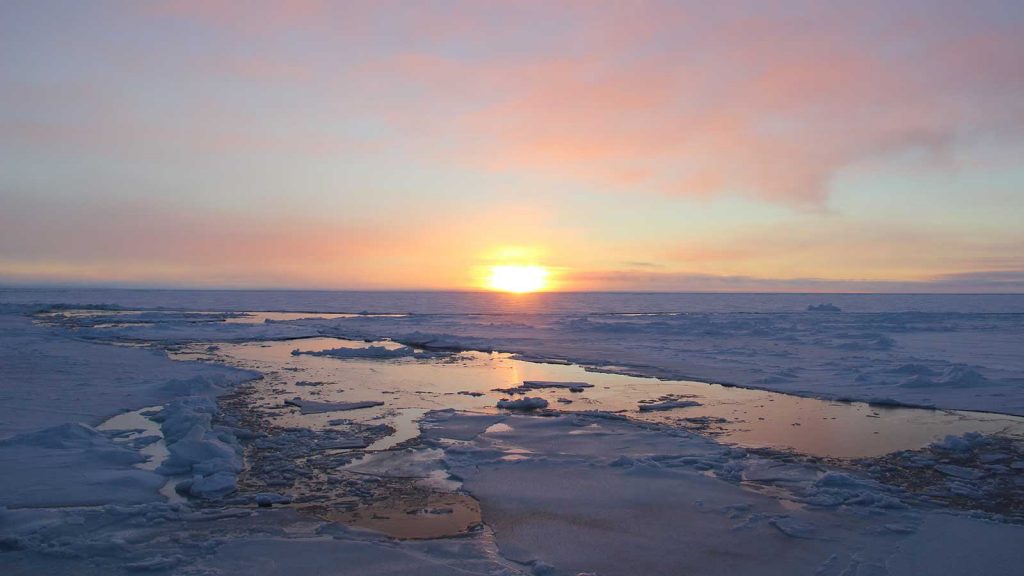 Art 1 Science 0. On a day when science just WILL not go your way, release your inner artist. On ice observation watch today I realized that while worrying about NUI, I had completely lost sight of the fact that today was our first clear day in ages and, what’s more, we were being treated to a midday sunrise/sunset. Time to take five minutes, bundle up, and take a step out side for a breath of VERY fresh (-13°C; 9°F) air. (photo by Chris German, Woods Hole Oceanographic Institution)

Today (Thursday) has been a trying day. There have been moments when I have wished that Star Trek was real and I could just be beamed off the ship. But that isn’t how ocean exploration works. We are here. Some stuff will work, other stuff won’t, and you have to roll with the punches.

END_OF_DOCUMENT_TOKEN_TO_BE_REPLACED 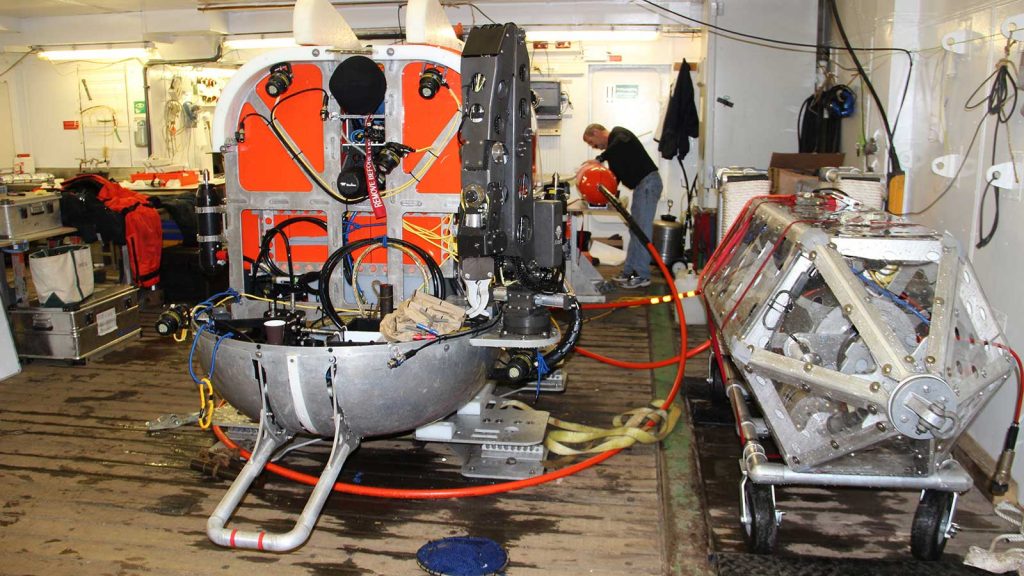 WHOI engineer John Bailey preps NUI to dive in ROV mode, with the “REMOVE BEFORE FLIGHT” tag attached to the protective cover on our primary HD video camera and the Kraft manipulator that we will be using for any sampling visible on the vehicle’s front basket. (photo by Chris German, Woods Hole Oceanographic Institution)

Tomorrow (Thursday) should be a great day—our first NUI dive to the seafloor in an ice-covered ocean with the vehicle in remotely operated mode. And I am incredibly nervous. Excited too, but simultaneously worrying about the many things that could go wrong.

END_OF_DOCUMENT_TOKEN_TO_BE_REPLACED 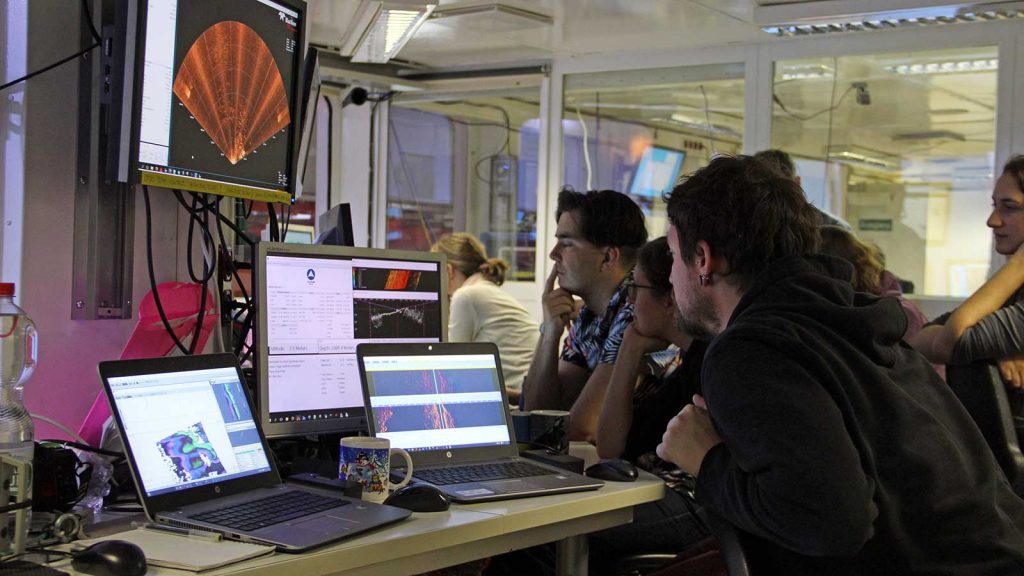 Deep thoughts. My partners in crime from the OFOS camera surveys over the deep vent area (left to right): Autun, Paulina, and Simon—all completely engrossed in the scenes coming from our live feeds as the camera passed over regions of the Arctic seafloor that have never been seen before. (photo by Chris German, Woods Hole Oceanographic Institution)

Whatever our deep site gets called, it won’t be named Mount Brexit. But it also continues to perplex us.

After the two OFOS dives late Monday and again on Tuesday afternoon, we believe we have closed in on our site of active venting. We haven’t laid eyes on hot water gushing from the seafloor yet, but we have seen chimney-like structures rising up from the seabed, poking through sediments, and landscapes of multicolored sediments draped up against steep, cliff-like rock faces.
END_OF_DOCUMENT_TOKEN_TO_BE_REPLACED 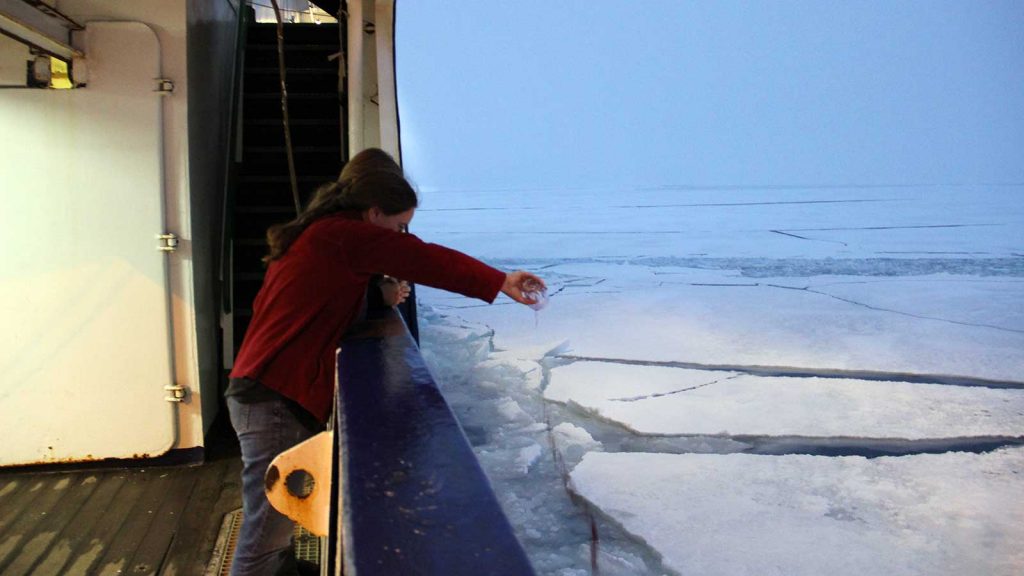 Maren (with Janna behind) pours a glass of port in offering to the ocean for a favorable last CTD tow-yo. But if one pours port out to starboard at sea, should one also pour Madeira out to port? (photo by Chris German, Woods Hole Oceanographic Institution)

We were due back at the deep vent site at between 2 and 3:00 a.m. today (Monday, October 3), but the thick ice meant that my phone didn’t ring until after 4:00 a.m.—a real luxury. I got up to meet with Maren and Janna from the CTD team, who were busy checking the ice drift direction.

END_OF_DOCUMENT_TOKEN_TO_BE_REPLACED

Hydrothermal Vents and the Search for Extraterrestrial Life

With the second half of the cruise set to begin and NUI in the midst of its changeover from autonomous robot to remotely operated vehicle, we thought it might be a good time to take a look back at a video Chris made after a trip to the Mid-Cayman Rise. Sign up for email alerts in the sidebar to be notified the moment we publish a new post from Chris and the NUI team in the Arctic! 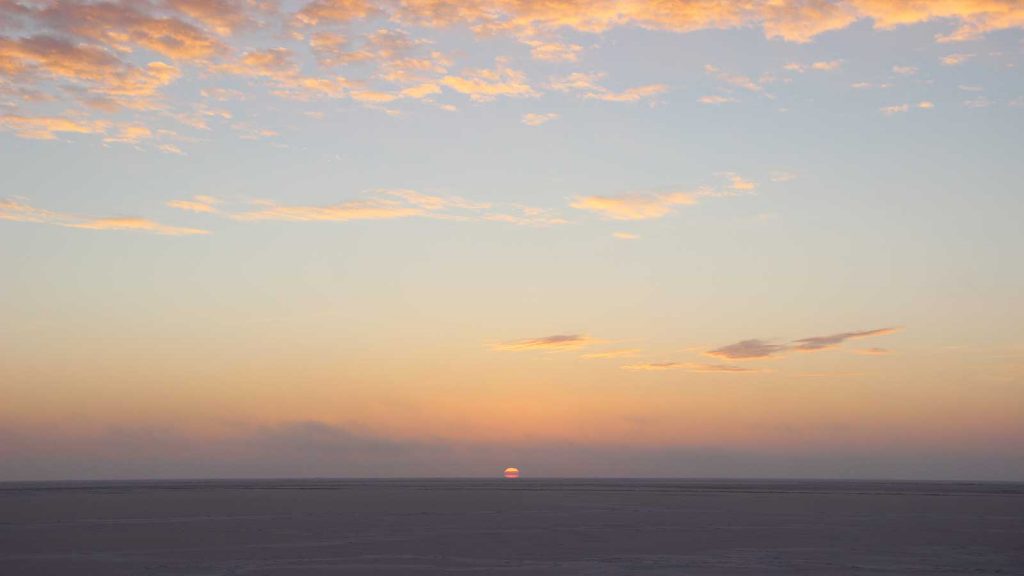 While it’s true that the sun never rises above the horizon anymore at this latitude, the predictions of no more sunrises or sunsets painted a much bleaker picture than what we’re experiencing. Happily, on those days whenever the sky is clear (last Friday and again—for those who were awake—Sunday morning) we have been treated to a gorgeous combined sunrise/sunset as the sun (at least a part of it) has appeared on the horizon before sliding back out of view again. Not a bad way to welcome in the first day of the second half of our cruise. (photo by Chris German, Woods Hole Oceanographic Institution)

Saturday was the midpoint of our cruise and the end of the beginning phase of our work. Suddenly, there is a new sense of urgency with the news that we need to leave station at the end of October 12 to be able to guarantee an on-time return in Bremerhaven, Germany on October 23. So, even though we still have three more weeks at sea, there are only 10 days left to make a difference. That made it a good time, therefore, for Antje to organize break to give everybody a chance to rest and recharge.

END_OF_DOCUMENT_TOKEN_TO_BE_REPLACED 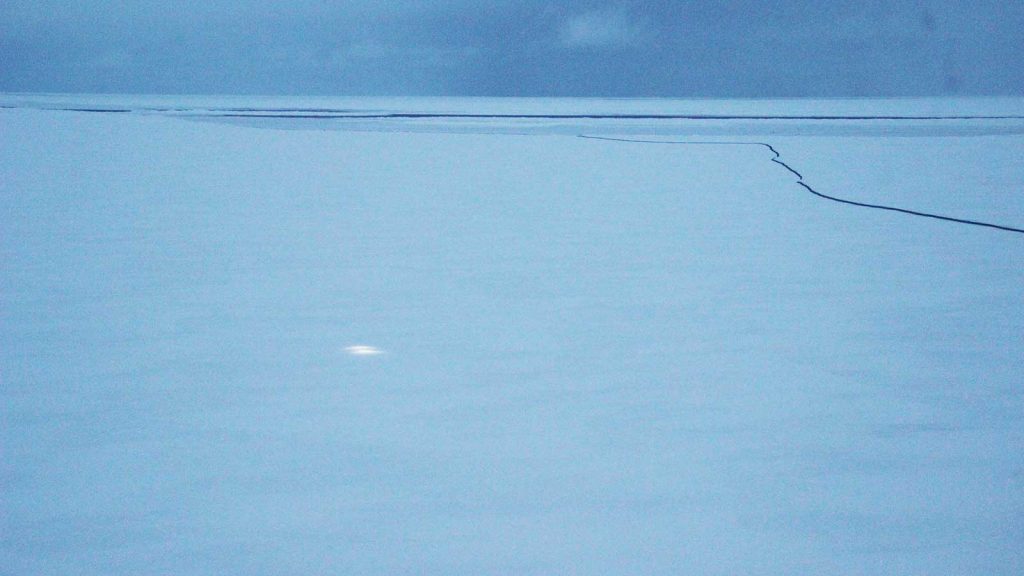 The moment we realized all was not well. NUI lit up the ice under the bow of the ship as it slid silently by and headed off to port, away from where it was supposed to be. It never even acknowledged we were there. Is it just being a moody teenager? (photo by Chris German, Woods Hole Oceanographic Institution)

NUI is back on deck after Dive 15 and it was a success. Mostly.

Friday began with a 5:00 a.m. start for the NUI team, because they really, truly, absolutely, positively assured me that after Dive 14 there was no need for them to start work at 4:00 a.m. every again, to be ready for an 8:00 launch. ☺

I believed them and all was going well, until it wasn’t. ☹

END_OF_DOCUMENT_TOKEN_TO_BE_REPLACED

These Aren’t the Vents You’re Looking For We had a really interesting time with the CTD last night. New science has come to light, so to speak.

END_OF_DOCUMENT_TOKEN_TO_BE_REPLACED