Over the last few days, the science party, vehicle operators, and ships crew have been working feverishly to prepare for departure from New Zealand. The transformation of the research vessel Roger Revelle from its previous cruise to MESH has been dramatic and has included the addition of five container vans, an ROV (Jason), an AUV (Sentry), a crane, miles of wires and cables, hundreds of boxes and equipment cases, and (of course) new people. 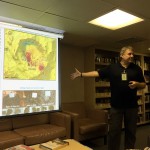 Richard Wysoczanski of New Zealand’s National Centre of Water and Atmospheric Research gives the HAVRE team a preview of what we might find once we reach our dive sites. 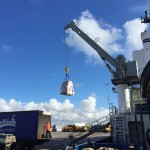 A fraction of the equipment and stores we took on board R/V Revelle during mobilization in New Zealand.

Both Jason and Sentry arrived at the ship entirely assembled, but numerous small modifications and extensive testing must take place before they are ready to get wet. We had to develop a plan for configuring Jason‘s science basket, with its sampling equipment and sensors. Jason can carry 400 pounds of gear and samples, but the placement of equipment in the basket thought through ahead of time according to the order and manner it will be used. At the same time, the Sentry team was busy tweaking the vehicle’s command and control software and sensor payload for the upcoming missions we have planned for it.

Installation of the acoustic equipment that will track both vehicles while they are underwater has also taken place. This ultra-short baseline (USBL) system is installed in a well that passes through the ship’s hull and pings the vehicles in the water so that we know their position relative to the ship at all times.

The researchers on board have likewise been busy preparing laboratory spaces to process and describe rock samples, assembling gear, and getting computers hooked up to the ship’s network.

Yesterday evening, we also had a visitor to the ship, Richard Wysoczanski of New Zealand’s National Centre of Water and Atmospheric Research (NIWA). Richard was one of the first scientists to recognize the eruption at Havre and conducted initial sampling of the volcanic deposits. He gave a short presentation to describe the mapping and sampling he has done, which spurred vigorous discussions of what we might find once we get to the site.

All of this activity has helped build anticipation of the work ahead, and we are set to get underway at mid-afternoon (New Zealand time). Stay tuned!