Most of the gear had been shipped, and I’d purchased a few extra pairs of long underwear. And after some anticipation, plane tickets in hand, I arrived at the airport in Boston on the morning of October 1. I had four bags to check — one enormous duffel bag of personal items and three crates of scientific gear we had been unable to ship to Port Hueneme in time to be sent to the station by sea. The silver trunk weighed 90 lbs., but paying the American Airlines overweight and excess baggage fees was far less expensive than it would have been had we shipped the items overnight via a carrier such as FedEx or UPS.

With bags checked, I boarded a first flight to Dallas-Fort Worth, and then a 10-hour flight to Santiago, Chile. In Santiago, I met the dozen or so other scientists and support personnel with whom I would travel the rest of the way to Antarctica. Jimmie, a 30-year veteran contractor to the Antarctic Program, immediately met us at our gate and helped us navigate our way through immigration and customs. (All USAP participants travel through either Chile or New Zealand to get to their destinations on the cold continent, and are therefore subject for at least a few days to the laws of one or the other country.) We learned there were a few things with which Jimmie could not assist, including violations (however accidental) of Chile’s extraordinarily strict policy against importation of live animal or plant products. One undeclared banana, it turns out, will net you a tidy fine — payable on the spot — of US $350. A domestic flight on LAN Express took us from Santiago to Punta Arenas.

Once through customs, we re-checked our bags through for our domestic flight to Punta Arenas, a port city 2,269 km (1410 mi) to the south. The flight route from Santiago to Punta Arenas parallels the western slope of the Andes, and the scenery is spectacular. From my seat on the airplane, I took in the serrated, tooth-like peaks of these young mountains, the southern vertebrae of the geological spine of the Americas. (The Andes, formed in the Mesozoic and Tertiary periods of roughly 100 Ma, are very new land compared with the uplifted, age-worn roots of ancient mountains I explored as an adolescent in New York’s Adirondacks.) The view from the plane to Punta Arenas. Courtesy Austin Melillo.

From nearly 35,000 feet, the sight of this new earth rolling away beneath me was a reminder that full comprehension of the natural environment so often depends on one having a perspective appropriate to the system of interest. The true breadth and enormity of this 5,000-mile long mountain range and the gargantuan, serpentine glaciers that surged between its peaks below were comprehensible only from my macroscopic vantage in that airplane.

In science, this rule of perspective is ubiquitous: In the same way that the true nature of the Andes was only comprehensible from an airplane that permitted a field of view extending hundreds of miles in every direction, the biological and chemical systems that I will be studying over the next four months are comprehensible only with microscopes and mass spectrometers that give order to living cells of lengths of micrometers and chemical compounds on orders of angstroms. That one can understand of a natural system only with the proper perspective is as true for a casual observer of geology in an airplane as for a phytoplankton ecologist or chemical oceanographer at a research station in Antarctica. The USAP warehouse in Punta Arenas. We had roughly two days ashore in Punta Arenas before we began the four-day transit to Antarctica. It was early spring, and the ski area in the hills in back of town had, to my disappointment, closed for the season just that Sunday prior. At a warehouse leased by the Antarctic Program, the other personnel headed for the ice and I were issued our “ECW” — emergency cold weather — clothing. I was instructed by Tina, a USAP veteran and member of Oscar Schofield’s research group at Rutgers University, to try on every piece of gear that had been issued to me — sometimes, they don’t get the sizes quite right.

Other activities ashore in Punta Arenas included a few last early morning runs along the water (I was joined by Jo, a USAP doctor who was also headed to the station) and a required pilgrimage to rub the foot of a statue of Ferdinand Magellan, the Portuguese explorer for whom the Strait of Magellan is named.

Magellan’s ship completed the first circumnavigation of the globe in 1522. In 1519 he rounded South America through the channel of water that bears his name; the passage separates Tierra del Fuego and other islands from mainland South America. Rubbing the foot of Magellan is supposed to ensure fair weather in advance of one’s crossing of the notorious Drake Passage, the 430-nautical mile wide reach of the Southern Ocean that lies between South America and the tip of the Antarctic Peninsula. Magellan’s name also persists in the names of countless tourist shops, restaurants, banks, and other places of business throughout Punta Arenas.

The weather in Punta Arenas reminded me of early March on Cape Cod, in New England. A steady wind blew as temperatures hovered in the low 40’s (ºF). A cold rain turned to sleet and then back into cold rain again. I hope that the weather, and the muted grayness of the sky, would serve as an appropriate acclimatization for the journey ahead. 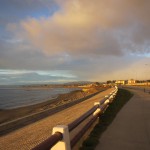 An early morning run along the water in Punta Arenas. 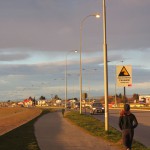 Tsunami zone warning signs are a fixture on the waterfront. 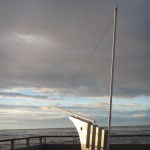 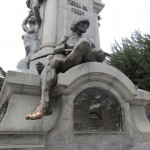