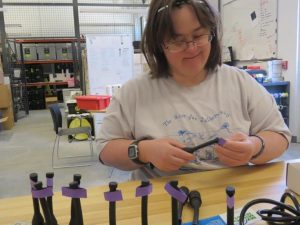 Cape Abilities consumers work at the Oceans Observatories Initiative labeling dummy cables for use in buoys located all over the world. Workers are involved in precisely cutting and taping labels and correctly identifying each specific plug to be labeled. Multicolored dummy plugs help scientist to quickly identify each plug durying deployment and recovery so that data from the instruments can be plugged in and downloaded in a timely manner.

The crew comes weekly to sort through the incoming and outgoing plugs and make sure that they are all labeled for the next cruise. Workers also clean each dummy plug that comes back from long term deployments at sea.

More information about Ocean Observatories Initiative and their partnership with WHOI here. 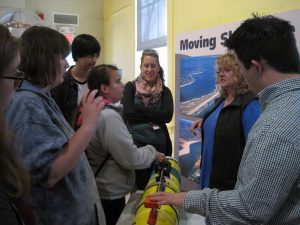 The group deep in discussion about the adventures of the WHOI shark cam. (Photo by Elaine Sinni)

Beginning in September 2015, WHOI and Cape Abilities partnered up with the support of the Tower Foundation to introduce high school special education students to the world of oceanography. We aim to provide an educational experience involving oceanography, science and technology while demonstrating opportunities for people with disabilities at WHOI.

Please contact Project Manger with inquiries about the program! 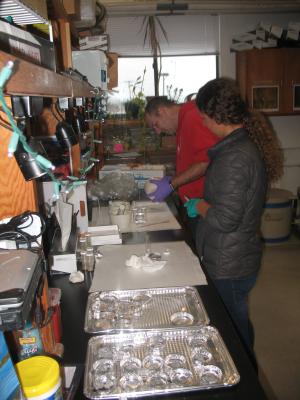 Consumers are involved in crushing sediment for use in Germanium Gamma Counters in the Coastal Systems Group. Gamma counts help to determine the age and sedimentation rate of sediment samples. Cape Abilities workers assist in this process by grinding sediment samples into a powder to be put in a vial and run in the dectectors. Detectors measure Pb-210 and CS-137 levels in the powdered sediment.

More information about gamma counts and isotope dating can be found here. 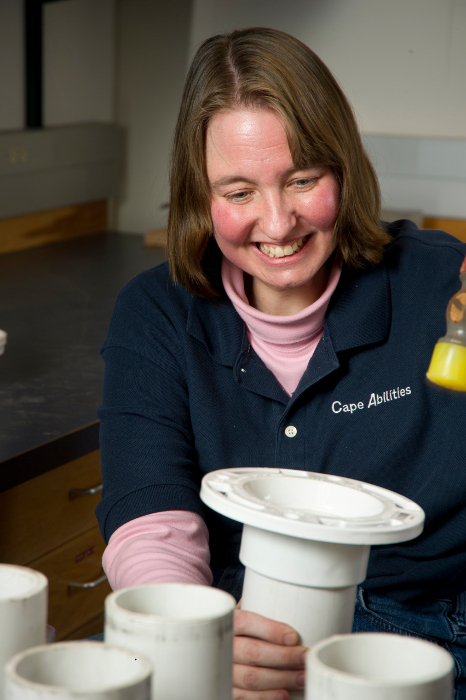 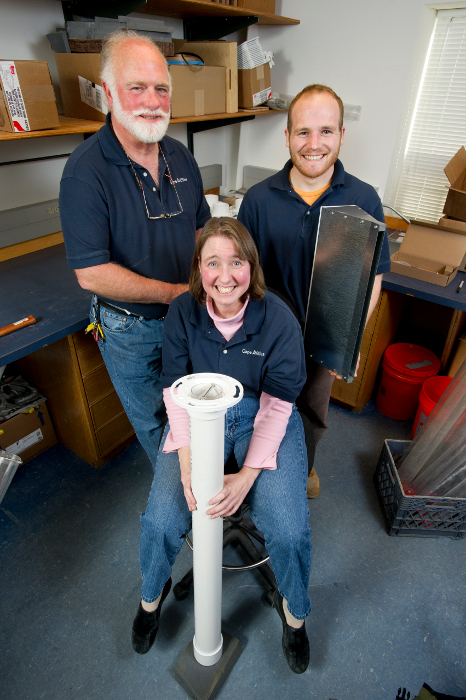 Cape Abilities has undertaken another project with Rob Evans, along with colleages Jeff Donnelly and Andrew Ashton in the Coastal Systems Group.

Under a SERDP grant, the scientists are researching the formation and evolution of coastal sedimentary environments, looking especially at the coastal response to climate change, sea-level rise, and anthropogenic activities. The group contracted Cape Abilities to build fifty new aeolian sediment traps for deployment on Santa Rosa Island, a barrier beach in the Florida Panhandle. The traps offer temporally and spatially specific high resolution data concering wind driven sediment transport. The three scientists will combine this data with LIDAR data offering large scale, lower resolution information concerning key points in the island's lifespan (following Hurricanes Katrina and Dennis), as well as sediment cores and Ground Penetrating Radar offering insight into past shape and evolution of the island, with the eventual task of modeling the future of the island dependent on variables such as sea-level rise and storm frequency.

The sediment traps are a two part system, with a collector above ground capturing the sand and a below ground well with insert container to receive the sand. We built two versions of the trap. The first version is a rotating collector and a realtime data logger measuring water level in the receiving tube (sand falls into a tube with water, displacing the water, raising the water level). With data logger also recording time, we can determine the angle of the rotating trap by simultaneously logging the wind direction and speed at a control station. The second version of the trap is stationary, angled towards the prodominant wind direction of the area. These traps will offer only mass flux over the deployment time.The sediment trap collector has sides of Galvanized Steel Metal, with a top and bottom made of PVC. The back of the trap has a fine (63 micron) stainless steel mesh to capture all but dust particles entering the trap. The trap well is composed of 3" PVC pipe, a pipe cap, and a flange to interface with the above-ground trap. The insert, which collects the sand, is made of 3" Polycarbonate Tubing, and capped at the bottom with an expandable gasket.

Awarded this contract in late January 2012, Cape Abilities completed all fifty traps by March 5, in time for their scheduled mid-March deployment on Santa Rosa Island. 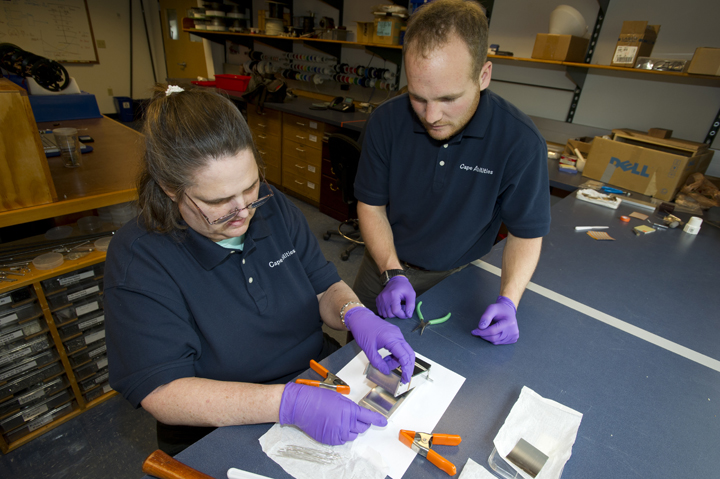 Cape Abilities Worker Carol Dimock crimps silver foil around a silver flag, a step in the creation of the silver core of the electrodes. Project Manager Trevor Harrison looks on. (Photo by Tom Kleindinst) 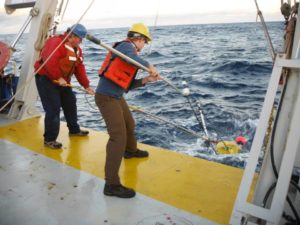 WHOI researchers recover a magnetotelluric instrument built with Cape Abilities electrodes during a cruise on the RV Connecticut. The instrument had been on the seafloor a hundred miles off of Cape Cod. (Photo by Nick Waldo)

From May 2011 through October 2011, we built 180 Silver-Silver Chloride Electrodes for use in a fleet of 20 new Seafloor Magnetelluric Instruments.

Originally designed between 1960 and 1970 by Jean Filloux of the Scripps Institute, the electrodes were long considered the best for their magnetotelluric application. For the new fleet, we took time to update the design, taking advantage of developments in materials science. The new model is more robust, less expensive, and more easily manufactured, with equal or better performance than the old version.

In May 2011, we began training a crew of four Cape Abilities workers to build the electrodes. They began their training with Environmental Health and Safety's General and Machine Safety courses. Project Manager Trevor Harrison and Cape Abilities Job Coach Buzz Friend trained the workers in the various tasks included in production, most of which are listed below. The crew worked in the lab one day a week for the six months, performing about 75% of the production process, with hazordous and delicate steps being completed by Trevor Harrison and WHOI Engineering Assitant Chris Judge. The entire batch of new Silver-Silver Chloride Electrodes is now complete. 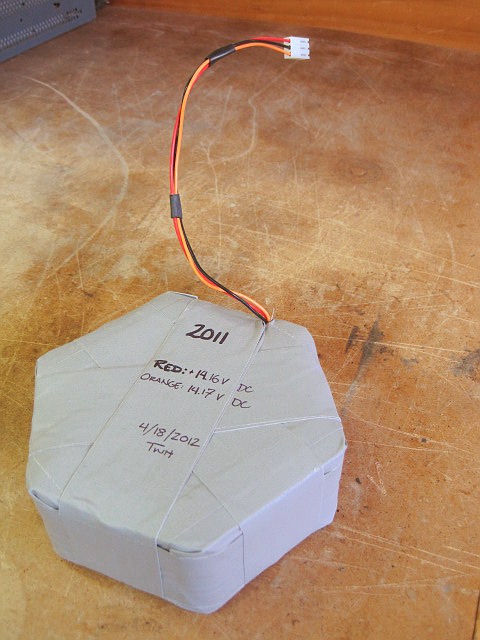 Acoustics researcher Art Newhall of the Ocean Acoustics and Signals Lab (in the Applied Ocean Physics and Engineering Dept.) contacted Cape Abilities to assemble a number of power packs for use in the REMUS AUV Gateway Bouy. These packs will be used during field work to study acoustic scattering from fish schools.

Cape Abilities Worker Carol Dimock, who learned soldering on the Silver Silver Chloride Electrode project, assembled six packs. She performed all of the steps necessary in the build-up:

The packs were load tested and cleared for use by the project manager.